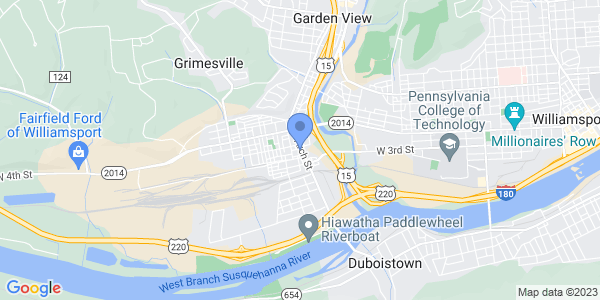 The Kast Hotel has operated since 1887 with three different names and two buildings.

A wooden structure built by A. Whul about 1860 was used as a general store by Daniel Hurr, and also used as a cobblers shop by Pat Carey.   Alfred Bastian Kast rented and operated this building as the “Old Homestead Hotel” for four years before purchasing it in 1887 and renaming it “The Arch Street Hotel”.  He ran the Hotel until 1896, when his son-in-law, Edward H. Kast, became the proprietor.

Jack McKelvy, brother-in-law of Edward H. Kast, took over and managed the Hotel in 1910-1911.  In the following year, Kast moved the old Hotel to the rear of its lot and ground was broken for the present brick structure.  The old structure was used until the new Hotel was built and then moved across the alley to become Jack McKelvy’s home.

The new brick structure built by Jacob Gehron Co. opened in November 1913 as the “Kast Hotel”, with vintage features such as the pressed tin ceilings, iron rails set into the basement floor, which was used to move barrels of whiskey to their storage place, terrazzo tile floors and beautiful wood features.

J. Grant Peterson, son-in-law of Edward H. Kast, became owner and operator of the Hotel in 1934 and was succeeded in 1975 by his son, Howard Kast Peterson, who in turn passed it on to his son, D. Scott Peterson.

Now under a fourth name, “The Hotel Kast”, the hotel has moved from under the generations of the Kast family and was purchased November 7, 2011 by Kevin and Shawn Pequignot.  Originally from Linden, PA, the two brothers have kept the Hotel as original as possible, but have renovated the 2nd and 3rd floors into rentable bedrooms, each with their own bathroom, and a laundry room on each floor.  The Hotel has two smoke free dining rooms with full lunch and dinner menus.  Separate from the dining rooms is a full bar with dining areas also.  In 2015 an outside patio was added and named “The Out Kast” for dining on the warm summer days.

We like to think of the Hotel Kast as the modern day “Cheers”, a small old neighborhood tavern where everybody knows your name.